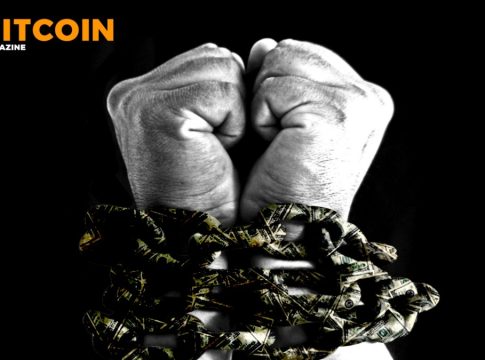 Bitcoin Is A Movement For Financial Freedom. Cryptocurrency Is Not

Cryptocurrency’s rise to mainstream pop-culture phenomenon has certainly transformed the overall blockchain ecosystem for the better; more people than ever before are actively participating and aware of the technology, institutions once rejecting cryptocurrency are investing millions of dollars in it and even “old-money” strongholds such as J.P. Morgan and Goldman Sachs are publishing reports on the performance of various digital assets.

Yet, the mainstream acceptance of blockchain technology has also brought with it some negatives. While the initial growth of the space in 2017 was centered around bitcoin (it was the first time that a lot of individuals, including myself, learned about bitcoin), recent growth has been more centered around alternative platforms. Although bitcoin has certainly appreciated in value over the past two years, it has almost become taken for granted within the broader cryptocurrency community.

Cryptocurrency influencers, and the media at large, seems to be more focused on the next dog-themed coin or the next rollout of ape-based non fungible tokens (NFTs). Cryptocurrency-focused social groups, such as community subreddits, often focus on sub-assets and decentralized applications (DApps) built on other platforms. To them, bitcoin is boring; a great proof of concept for blockchain technology, but nothing more. This is made all the more evident by the tendency for most to compare bitcoin with gold; while it is a plausible, and even sometimes accurate comparison, it paints bitcoin as a simple financial asset, something to hold and forget about.

This is in contrast to platforms such as Ethereum and its subchains, which are seen as innovative marvels much like a “tech” stock on the New York Stock Exchange. Thus, for those of us looking to expand bitcoin’s ideas by educating others about them, the question we often have to answer is: Why Bitcoin?

(Source) Bitcoin is often compared to gold, but it is a little more than that …

There are certainly two camps in the pro-Bitcoin community: those who believe that the best way for Bitcoin to compete with other networks is to expand its smart contract and decentralized finance (DeFi) capabilities, and those that believe that Bitcoin’s purpose is beyond that of other cryptocurrencies. In fact, Guillaume Girard recently wrote a piece in Bitcoin Magazine addressing this divide, painting the former as Bitcoin “progressives” and the latter as Bitcoin “conservatives.” Although I am certainly against political labels for anything Bitcoin-related, I do think this is an apt description. Much like a traditional political split, members of both parties believe that their philosophies and ideas will ultimately be better for Bitcoin’s evolution, helping it stave off other platforms. But, like most political discussions, one way of thinking is certainly more helpful for Bitcoin’s growth than the other, at least in the short term.

The truth is: Bitcoin was never meant to be a smart contract or DeFi platform.

While the innovation being done on the Lightning Network is certainly amazing, and has empowered developers to build more on the Bitcoin blockchain, Bitcoin should not be competing with other chains. Having previously built on alternative chains, I believe I can share a unique perspective regarding Bitcoin’s current position in the market, and why Bitcoin remains, and will remain, the digital asset that is powering our financial revolution. Alternative chains are much like application layers: they are designed not to power financial assets, but to power on-chain applications. This is especially true of modern-day blockchain networks who often compete with each other to attract developers, have the largest number of on-chain DApps and have the highest transactions per second (TPS).

READ MORE:   The Sandbox sell premium land next to EverDreamSoft with exclusive nfts

These networks thrive through the creation of DeFi and NFT platforms: as more money is locked into an on-chain yield smart contract promising high annual percentage yields (APY), spent on the next on-chain Shiba or spent buying NFTs on an on-chain marketplace, the traffic and overall value of the network increases. Smart contracts certainly have a place in our future: they are helping (although not as much as most might think) to decentralize and create an open-source internet. In fact, the Lightning Network is helping to power the creation of smart contract powered DApps on the Bitcoin blockchain, and more and more developers are slowly flocking back to Bitcoin to build on Lightning.

The purpose of this article is not to deride smart contracts or to even discourage the adoption of smart contracts by the Bitcoin ecosystem. (I actually believe that DApps, although currently in their infancy, will one day make up a significant part of internet-based apps.) Rather, it is to provide an alternative view of thinking about Bitcoin in relation to other blockchains. Bitcoin, at its core, is an alternative financial system supported in part by blockchain technology, but also by a community of people who are willing to fight for their financial independence, and who passionately believe in the vision that Satoshi Nakamoto created 13 years ago. In fact, Bitcoin’s white paper makes no mention of on-chain applications or smart contracts; it DeFines Bitcoin for what it is: a decentralized payment system that allows users to send transactions anonymously over a peer-to-peer network without the need for intermediaries.

While Bitcoin’s consensus mechanism may be slower and more energy-intensive than others, it is the most socioeconomically sound. Bitcoin’s value is partially derived from the commitment of a scarce resource (computing power), and it is fairly distributed to those who spend said scarce resource on the upkeep of the network (miners). Bitcoin’s scripting language is intentionally limited: its original creator(s) did not make the script Turing complete because it was meant to allow users to create more complex financial transactions, not build large scale applications that could be exploited (and often are on other platforms). Bitcoin is, and will always be, a peer-to-peer financial system. Its ideology and community will always be partially connected to the cypherpunks, who believed in a freer and more private society.

READ MORE:   Treasury Has Self-Hosted Wallets And Adding Crypto To BSA On 2022 Agenda

So, the next time you hear “Why Bitcoin?” in comparison to other cryptocurrencies on social media, at the office or at the dinner table, encourage your peers to look beyond numerical metrics such as TPS, the number of dog coins created on a platform, or the APY provided by a DeFi protocol on their favorite new alternative chain. Ask them to instead think about the philosophy of Bitcoin, the motivation behind why it was created and its eventual goal.

Transforming one’s perspective from looking at the cryptocurrency space as a tool for financial investment to looking at it as a movement for financial freedom is certainly difficult, but if they are willing to take that next step, then they will undergo the same transformation that a majority of members of the Bitcoin community, including myself, had to go through, and become true Bitcoiners.

(Source) The time is now!

This is a guest post by Archie Chaudhury. Opinions expressed are entirely their own and do not necessarily reflect those of BTC Inc. or Bitcoin Magazine.