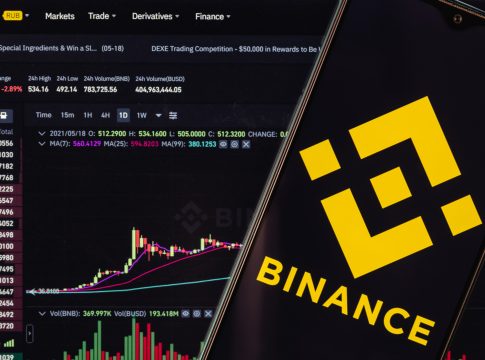 Cryptocurrency exchange Binance has been accused in a media report of agreeing to provide user data to Russia’s financial watchdog. The trading platform has refuted the allegations. It also insists it’s complying with Western sanctions imposed over Moscow’s invasion of neighboring Ukraine.

Binance Consented to Russian Request for Customer Info, Reuters Claims in ‘Special Report’
Binance, the world’s leading digital asset exchange, has agreed to hand over customer data to Russia’s financial intelligence agency, a report by Reuters suggests. The article refers to messages allegedly sent by Binance’s regional head Gleb Kostarev to a business associate revealing that the Russian officials asked for such information, including names and addresses, during a meeting last April.

The Federal Financial Monitoring Service of the Russian Federation (Rosfinmonitoring) saw its request supposedly motivated by the need for help in the fight against crime. Quoting an anonymous source familiar with the matter, the authors note that at the time, the financial watchdog was trying to trace millions of dollars in bitcoin raised by imprisoned Russian opposition leader Alexei Navalny’s team.

Rosfinmonitoring labeled his network a terrorist organization a year ago. The Kremlin critic claimed the crypto donations were used to fund efforts to expose corruption inside President Putin’s administration. Supporters who sent money through Russian banks were interrogated, Navalny’s foundation says. After his arrest in January 2021, it encouraged backers to donate via Binance.

Navalny was detained upon his return to the Russian Federation, after recovering from poisoning that the West blames on Russia’s Federal Security Service (FSB), an accusation rejected by Russian authorities. Relying on statements from several unidentified persons who interacted with the regulator, Reuters writes that the agency acts as an arm of the FSB. Officially, it is an independent body responsible for combating money laundering and terrorist financing.

Kostarev, Binance’s representative for Eastern Europe and Russia, reportedly consented to Rosfinmonitoring’s request to agree to share client data, according to the said messages. He also told his business partner he didn’t have “much of a choice.” Binance commented for Reuters it had been “actively seeking compliance in Russia” before the war in Ukraine, which would have required it to respond to “appropriate requests from regulators and law enforcement agencies.”

Crypto Exchange Rejects Claims as ‘Categorically False’
Quoting an industry research firm, the Reuters article further unveils that Binance’s trading volumes in Russia have spiked since the conflict began, as Russians sought to protect their assets from sanctions and a devaluing national fiat. Data from Cryptocompare indicated that in March Binance processed almost 80% of all ruble-to-crypto trades. On Thursday, the exchange announced, however, it’s limiting services for Russian account holders to comply with the latest EU sanctions.

Refuting the allegations in the report, Binance described the cited market data as inaccurate, and while pointing out that it “aggressively implemented sanctions against Russia,” in answers to questions from Reuters, it reiterated its belief that “it would be unethical for a private organization to decide unilaterally to freeze millions of innocent users’ accounts.” In a statement published Friday, the company said it had “stopped working in Russia” as soon as the war started.

While emphasizing that “fulfilling disclosure obligations to the authorities in each jurisdiction is a large part of becoming a regulated business,” the global crypto trading platform said that the suggestions it shared any user data, including related to Alexei Navalny, with agencies controlled by the FSB and Russian regulators are “categorically false.” Binance insisted it had not sought to assist the Russian state in its attempts to investigate the opposition leader.

What are your thoughts on the report alleging that Binance shared user data with Russia’s financial watchdog? Let us know in the comments section below.

Lubomir Tassev is a journalist from tech-savvy Eastern Europe who likes Hitchens’s quote: “Being a writer is what I am, rather than what I do.” Besides crypto, blockchain and fintech, international politics and economics are two other sources of inspiration.